A special installment of the on-going @chromeball series...
too long for Insta but too good not to be presented in its entirety.
Enjoy. 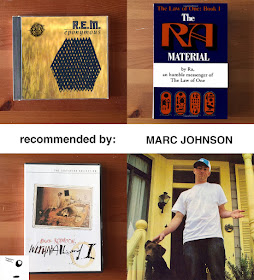 I grew up in a household that some well-adjusted people might call a “bizarre familial dynamic”. Instead of one of guidance and support, the best way to describe it would be a dynamic of contradiction and conflict. People wrestling with not understanding their internal conflict and in expressing that confusion, projecting that conflict externally onto those closest to them. Not loving or knowing how to love your loved ones. It was confusing. We weren’t a family that worked in the way that the families of friends worked. We were roommates who hated each other and our situation and we fought a lot. Shitty to one another. Actually, it wasn’t unusual at all. That was pretty normal on my side of the tracks.

There’s a line from Lolita where Humbert says that what happens to a boy during the summer he’s 14 can mark him for life. This album was the soundtrack to the summer of 1991 when I was 14, just before starting my freshman year in high school. By that time, I had taken to spending large spaces of time away from home and essentially living with various friends. That summer I was living with a friend I’d spent 8th grade causing trouble with and skateboarding every day. When I started staying at his house more and more often, this album was always on somewhere in the house. We listened to it religiously after a while. He was more of daredevil than I was, and he didn’t hold onto skateboarding as tightly as I did. It didn’t mean as much to him as it did to me. His family background ensured that skateboarding didn’t need to be his savior. Unlike me, he could go on to do whatever the hell he wanted. I clung so tightly to the magical language of this secret club I had discovered, and I prized it and valued it as if someone could show up and take it away from me at any moment. He had a kind of free-wheeling careless yin for the more introspective and serious yang that my upbringing had instilled in me. Our shit was always on the verge of collapse, so I always found myself drawn to friends who balanced that out with a childlike happiness that only stability and affluence will afford a kid. They needed a little grounding and I needed some time in the clouds up there with them. Just to know that it was there and what it was like. Knowledge that would serve me in years to come.

There’s a direct correlation between the spiritual and mental evolution and the higher order beings that personal success confronts you with and puts in your path. In reaching for and discovering your own potential, you’ll find yourself in the company of others whose personal experience will enrich your own and will help you grow and evolve. Striving to realize your higher self magnetizes you to others who have followed and are striving for the higher path, and so on.

You will end up where you’re going, as long as you keep going.

My buddy had been dating this girl from another middle school that whole year and in the first weeks of that summer, I was introduced to her. We got along really well. As teenage girls go, she was cool as hell and it was quickly decided by them both that I would be paired up with her best friend for the summer. They had more dubious intentions for my experiences of that time than I was aware of. And those intentions I had no awareness of were to end up being so much more important to me than anything they could’ve explained to my tiny brain at the time anyway. And I’m still so grateful to their teenage selves for not considering how I might feel about where they were about to take me. They taught me that sometimes you gotta just hang on and enjoy the ride. This album is the soundtrack to all of it.

It was to be the end of a lazy kind of idyllic perception of my world at that time, before a kind of shit-hits-the-fan reality set in just months later. I think that’s part of why this album means so much to me. It takes me back to an idea of what life can be. Carefree and fun and mysterious, the way a flower might feel just before it blooms, before it really knows what blooming feels like, and before it understands that people only want to clip those flowers that have bloomed. A state of imagination and wonder, of knowing that something else is out there, and imagining all of the good and hopeful things it could be. Ignorance and bliss.

This album is a compilation of alternate mixes and unreleased tracks from the early college-radio years and sound of R.E.M. The early lo-fi empty hall sound of Michael Stipe’s voice singing those strange and obscure lyrics over that goddamn awesome Peter Buck tin can jangly guitar sound of the 80’s immediately had a strange effect on my 14-year-old mind that continues to this day. The way the songs flow into one another plays in my mind like scenes from a movie. I can see pictures and montages of that summer with the intros and choruses of the songs. Pictures that bring back with each visit both a surprisingly ignorant and naive sadness and a fondness that words can do no justice for. It’s the kind of music that should be playing while you’re doing something other than listening to music. It belongs in the background, like the walls of an old bedroom in a house you used to live in.

Favorites from this album:
Talk about the Passion
Don’t Go Back To Rockville
Driver 8
Fall on Me
The One I Love

This is a heavy book. It’s hard to use words to describe it. I highly recommend this for anyone out there seeking to understand metaphysical spirituality or who simply digs tripping out on some UFO / ancient history stuff. It’s even way beyond that. It’s like a spirit describing and explaining life beyond the physical realm we know. A spirit with access to information that transcends time and space.

Don Elkins was a PhD physicist and a pilot for a commercial airline in the 1970’s and 80’s. He developed an experiment in 1962 designed to contact extraterrestrials, and using ‘tuned trance channeling’, the research group — L/L Research — made contact with a group of extraterrestrials in 1981. Almost 20 years later. Carla Rueckert was at the time, the 18 year-old human instrument for this contact, and using extremely precise instructions given by the RA group during the first contact, L/L was able to tune her meditative frequency to a wavelength that supported communication from Don Elkins to RA, using Carla as the human radio once the signal was tuned to. Don spoke to RA while Carla was asleep, her tuned body instrument responded, and Jim McCarty sat in and recorded and transcribed each word that came through. What they recorded was the verbatim word-for-word conversation between Elkins and RA, through Rueckert acting as a sleeping medium. RA used Carla’s knowledge of the English language to form its extremely complex 106 answers to these first questions and ultimately five more books’ worth of questions Don Elkins later asked it in subsequent sessions. The Material came through in English but has its own unique glossary of terms that RA used.

The scope of information that came through Carla is beyond explanation. Don asked RA almost anything and everything about itself and its life, and tons of questions about our pre-recorded history. It’s the history of our solar system, of our planet, of life on other current and previously existing planets that were destroyed long before we can understand translated in terms of Earth years. It’s the nature of life itself, the nature of the soul and the nature of good and evil. This is pre-religion stuff. It goes far beyond our simple concepts of an Earth-centric God or Satan. RA explains itself as a non-physical light consciousness that visited and taught the Egyptians in the post-Atlantis, pre-dynastic period and was later worshipped as the God Ra, symbolized by the Sun. Ra was not a God. Ra exists as a group of souls on a much higher level of density, or dimensional existence outside our ability to normally perceive, what it explains as the Sixth Density, while we here are tuned into and experiencing Third Density, on a much lower vibrational solid matter wavelength or ‘radio station’. There is no English or human word for RA, so it aligns with the last previously known sound complex “RA” that the ancient Egyptians used. The form RA took to appear to humans in ancient Egypt resembled a glowing body of light, hence the term Sun God used by the much later generations of Egyptians. This a long explanation of the book, but it barely begins to describe how exciting and fascinating this material is.

A fucking genius and insanely hilarious and quotable recounting of writer/director Bruce Robinson’s early years as struggling actor in Camden, London in the late 60’s with his friend Withnail. I’m a fan of well-written dialogue in films. And this might be the best scripted dialogue I’ve ever seen.

Over the years, fans developed a Withnail & I drinking game; matching each character drink for drink in the film. This involves nine and a half glasses of red wine, half a pint of cider, one shot of lighter fluid, two and a half shots of gin, six glasses of sherry, thirteen glasses of whisky and half a pint of ale.

The two out of work actors go away on holiday to Withnail’s uncle Monty’s cabin in the country. When Uncle Monty surprises the two and shows up to spend the weekend with them, all hell breaks loose for Marwood as Uncle Monty takes liking to him.

“I mean to have you, even if it is BURGLARY”

They then return to London to deal with an unexpected intruder in their home, Danny the Drug Dealer. The dialogue that ensues is iconic.

Marwood: He’s right, Withnail, look at him. His mechanism is gone. He’s had more drugs than you’ve had hot dinners.

Withnail:  I’m not having this shagsack insulting me. Let him get his drugs out.

Danny: [pulls baby doll from satchel]
This doll is extremely dangerous. It has voodoo qualities.
[removes doll head and empties it out and holds up a pill]
Trade… Pheno Dihydrochloride Benzerex.  Street… ‘The Embalmer’…

Withnail:  Balls. I’ll swallow it and run a mile.

Withnail: Two quid? You’re out of your mind.

Withnail: You can stuff it up your ass for nothing and fuck off while you’re doing it.

Danny:  No need to insult me, man. I was leaving anyway.

Withnail is based on Robinson’s friend and Camden roommate the actor Vivian MacKerrell, who did, in fact, drink lighter fluid and was unable to see for days afterward.

Withnail & I is the definition of a classic film in every way.

Thanks for taking the time, Marc. More Recommended By's here.
chops at 20:36